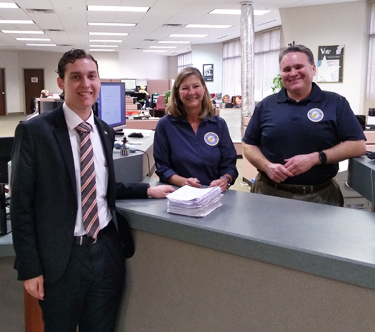 After over a year of collecting candidacy petitions, Libertarian Party candidate Andre Klass has officially exceeded the required threshold of 3,037 signatures, securing his position on the ballot as the first qualified candidate in the race for Seminole County Commission District 5.

“I am truly grateful to the many Seminole County residents who signed my petition to help me reach this very important milestone,” said Andre Klass, candidate. “It means a lot to be earning the faith and trust of our local citizens who believe in me to lead our county in a more positive direction.”

Klass was originally the very first candidate to file for the District 5 seat, which is presently held by retiring incumbent Brenda Carey. Despite now facing a hotly-contested race with multiple opponents from the two major parties, Klass refuses to allow himself to be intimidated or deterred from his mission to make a lasting impact for his community.

“Running for this office was just the right thing to do,” Klass said. “As the only born-and-raised Seminole County resident in my race, it is important to do my part to pursue making our government more responsible, transparent, and accountable to the people. The future of our hometown communities is at stake.”

By applying Libertarian philosophies to local quality-of-life topics, Klass knows that his candidacy has great potential to change the political landscape for the better in Seminole County. Klass’ active community involvement and strong enthusiasm on the campaign trail has been attracting lots of attention, not just from the county’s residents, but also on the state and national level within his party.

“Andre Klass is a promising candidate and a rising star in his community,” said Steven Nekhaila, chairman of the Libertarian Party of Florida. “Andre is setting a new standard for Libertarian campaigns, and his dedication and commitment to the people of Seminole County is truly a cut above.”

“Andre Klass has impressed me every step of the way on his path to the Seminole County Commission, from doing candidate training through collecting over 3,000 signatures to qualify for office,” said Nicholas Sarwark, national chair of the Libertarian Party. “He is regularly engaging with members of his community and an inspiration to Libertarian Party candidates around the country. The residents of Seminole County will be lucky to have him in their corner.”

As Seminole County’s commissioners are elected in an at-large capacity, Klass’s race will be decided by a countywide electorate of over 300,000 registered voters. The 2020 general election will take place on November 3, 2020.