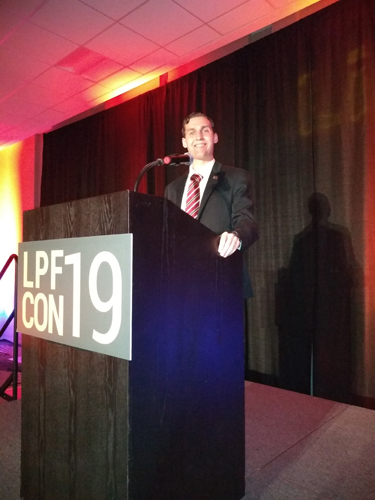 “He has a reputation of being extremely honest, extremely nice, extremely active, he’s at everything and knows everybody, this guy’s putting the work in. He does it with a smile on his face every time, a pressed shirt, he is the meaning of having lots of Klass.”

During his speech, Klass discussed being raised by a single mom, his underlying desire to make a positive difference in the world around him, inspirations that give him confidence on the campaign trail, how Libertarian philosophies apply to mainstream politics, and ways that he intends to improve local quality of life in a manner that would reduce the burden on taxpayers and restore the lost sense of community unity.

“The success of this convention reflects well upon the growing movement of restoring government accountability and preserving our constitutional liberties,” said Andre Klass, Candidate. “I am very grateful to be included in this event and look forward to more opportunities like these as my campaign continues to progress.”

Klass closed with a focus on the Libertarian Party’s identifying color of gold, and invoked how gold is the color of first place Olympic medals, the color of champions, and the color of victory; a victory he commits himself to achieving because he knows this is what the people need right now, a more independently-minded voice that will bridge people together from both sides of the aisle. He also gave words of encouragement that even as ordinary citizens, we all have the power and authority to stand up and approach our local officials, speak out, and make a difference.